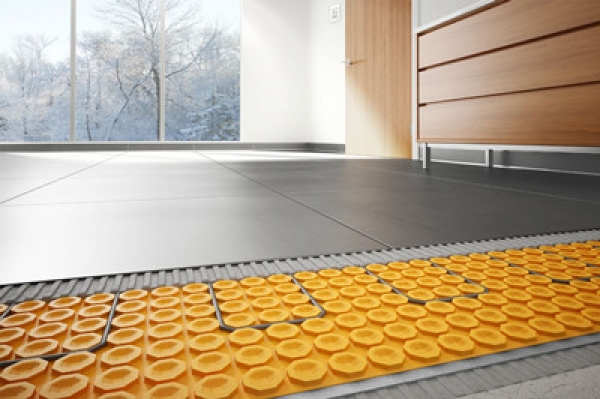 When it comes to flooring for a room with an under-floor heating system, it turns out that how well it works depends on not only the wood type but also the structure of the floorboards. Qingqing Chen, Xiaolei Guo, Jie Wang and Pingxiang Cao from the Faculty of Material Science and Engineering, Nanjing Forestry University show us the differences.

According to a study conducted by Seo et al, the thermal transfer performance of flooring is dependent on the thickness of the material used. The transversal thermal conductivity of wood increases with density, temperature and moisture content. All three types of EWF tested have the same dimensions: 910mm long, 125mm wide and 15mm thick. Four species of hardwoods with varying densities were selected as decorative veneer for this study. In order to avoid the influence of moisture content on the results, the original moisture content was controlled within a certain range for all samples.

The experiment was conducted in a laboratory simulating an environment with a floor heating system (as shown in Figure 2). A heating system manufactured by O.S PANTO S.R.L (Italy), SEF DKC18, was used. In the lab, a copper pipe was installed with a narrow pitch in a cement mortar ground. Hot water from a boiler was supplied to the floor coil, an X-L pipe underneath the floor surface. A layer of polyethylene foam covers the cement mortar ground. The laboratory was also equipped with a humidifier, which regulated the overall humidity by spraying water vapour in the room.

The thermal conductivity of the flooring samples were measured using a surface thermocouple thermometer DT-613 produced by CEM. The temperature of the top and bottom surfaces of the samples was simultaneously measured with a NR-81533B probe from CEM.

Plan of the experiment

As discovered in studies by Kang et al, the perfect flooring surface temperature ranged from 22.0 to 38.8 °C. This experiment was carried out in late autumn when the outdoor temperature was typically 15°C during daytime. Hence , the laboratory temperature set for the experiment was 35 ± 2 °C. On account of the heat loss during the hot water transfer through the cement mortar to the engineered wood flooring, the temperature of the hot water was set to 40 ± 2 °C.

At first, the primary temperature of the top and bottom surfaces of each engineered wood flooring sample was measured and recorded. Then, the temperature control system of the laboratory was activated and set to 40 ± 2 °C. Four or five hours later, the indoor temperature was raised to the needed temperature. The temperature of the floor was also measured and recorded at 35.5 °C. Afterwards, all the samples were placed on the ground in a flat orientation with the decorative veneer facing upwards. The top and bottom surface temperatures of each sample was measured three times every five minutes, and the average value is recorded. The experiment was stopped when the variation was too small to detect differences in the final measured data when compared to the previous data.

Comparing the final upper surface temperature of the four different veneers, eastern black walnut has the highest temperature while cherry has the lowest temperature regardless of the structure. The greater the change, the faster the temperature rises. The higher the density of the wood used, the faster the temperature changes and the better the thermal conductivity. This is because the distance between the molecules becomes shorter as density increases, making heat transfer easier. Some explanation about air  Eastern black walnut transfers heat the fastest followed by birch, maple and cherry respectively.

1.Comparing engineered wood floorings that have the same structure but different decorative veneers, it was found that the higher the density of the wood used (as the veneer), the better the thermal conductivity and the lesser the heat lost during transfer.

3.Based on the wood types and structures tested, engineered wood flooring with structure A and an eastern black walnut veneer is the best choice for someone looking to install an under-floor heating system.

Rate this item
(0 votes)
Tweet
More in this category: « Making A Splash With Colours Greenery: Symbol Of New Beginnings »
back to top