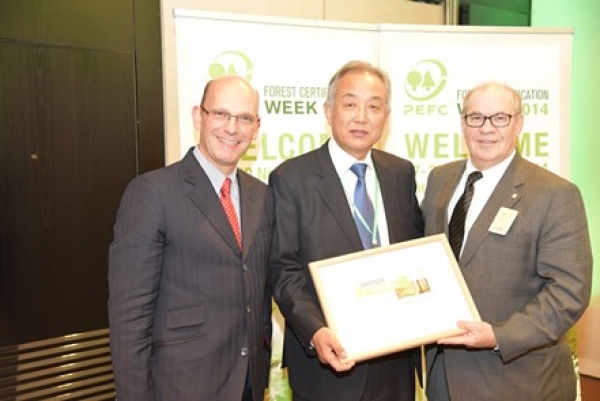 With the highest afforestation rate of any country in the world, the endorsement of the China Forest Certification Scheme by PEFC will help create a model of certification and sustainability that other Asian countries can follow. By Michael Buckley, World Hardwoods

China is currently reported to have the highest afforestation rate of any country in the world, increasing its forest cover from 12 percent thirty years ago to more than 21 percent in 2013. The country is continuing to implement policy measures to increase the quality and quantity of its forests and aims to bring forest coverage to 23 percent, or 223 million hectares, by 2020. The endorsement of the China Forest Certification Scheme (CFCS) by PEFC was re-affirmed by its leaders in Paris in November 2014.

In February 2014, the endorsement of the China Forest Certification Scheme by PEFC was announced, representing a significant milestone for safeguarding global forests given the importance of the country in the forest products value chain and its substantial forest area.

“China is not only the world’s largest manufacturer of forest products, but also among the five countries with the largest forest area in the world,” said Ben Gunneberg, PEFC general secretary. “We understand that China is interested in actively promoting both forest management and chain of custody certification to ensure the long-term sustainability of its forest sector, especially considering the millions of people it employs and the natural resources it relies on.”

The CFCS was endorsed by the PEFC General Assembly after demonstrating compliance with its globally recognised sustainability benchmarks, a suite of requirements for covering a range of issues including standards development, sustainable forest management, chain of custody certification as well as certification and accreditation requirements.

“We are proud to be endorsed and part of PEFC, the world’s leading forest certification system,” said Wang Wei, chairman of the CFCC. “The scheme represents best practice in forest management and is unique in considering the needs of the specific forest ecosystems present in a particular country, the legal and administrative frameworks, and the socio-cultural context, which is important for China.”

“This endorsement does not only have the potential to substantially increase the demand for, as well as the supply of, certified material, but we hope that it will also inspire other countries in the region supplying China to follow our example and promote sustainable forest management through this certification,” he added.

China is the second Asian country after Malaysia to successfully achieve PEFC endorsement for a national certification system, and the Indonesian Forestry Certification Cooperation (IFCC) submitted its scheme for assessment in November 2013.

A range of other countries in the region, including India, Japan, Myanmar, Nepal, Philippines, South Korea and Thailand are advancing in national system development and exploring options for eventual international recognition by PEFC.

There are already reportedly about two million hectares of forests in China CFCS-certified, and more than 200 professionals have participated in the CFCC auditor training over the past years to be able to respond to the expected increase in demand for certification services following the endorsement.

Marking their first PEFC General Assembly participation as an endorsed national forest certification system in November 2014 in Paris, the CFCC presented William Street, chairman of the board of PEFC International, with a traditional Chinese gift known as a DING.

“We are very proud to present the DING to the whole PEFC family, as it represents our wishes for strong and reliable cooperation for a long time to come,” said Mr Wang. “This is a very special DING, as rather than the traditional bronze; it is instead made from CFCC-certified walnut fruit shell.”

The DING can trace its history back to ancient China when it was an important sacrificial utensil made from bronze used to express the wish of prosperity, stability and longevity. Since then, the gift has been given to demonstrate wishes of good cooperation, trust and reliability—most famously given by the Chinese central government to the UN in 1995.

“It is an honour to receive a gift that carries so much meaning, on behalf of everyone who makes up the PEFC alliance,” commented Mr Street, following the presentation. “The endorsement of the Chinese national system represented a significant milestone for PEFC, with China not only one of the world’s largest manufacturers of forest products, but also among the countries with the largest forest area in the world."

The endorsement was the centrepiece of the recent International Symposium on Forest Certification, held in Beijing. Hosted by the Chinese Academy of Forestry (CAF), in collaboration with PEFC International, the PEFC China Initiative and Asia Pulp and Paper, the event brought together over 100 representatives to celebrate the launch of the Chinese National Standard for Sustainable Forest Management.

With so many participants coming from the world of sustainable forest management, including NGOs, universities, companies and certification bodies, the symposium was the perfect setting for exchanging experiences and discussing a wide variety of topics.

The two day event, which took place between in September, was split into a series of sessions covering a range of topics, including a global and Asia-specific overview of forest certification, government procurement policies, market perspectives and due diligence. PEFC members also played an important role during the symposium, with several speaking at the event, providing their experience of creating and managing a national forest certification system in their respective countries.

“The presence of several speakers from countries around the world reflects the internationalism, importance and significance of the development and implementation of the CFCC  system,” highlighted Sheam Satkuru-Granzella, PEFC International Vice-Chair, during her keynote remarks.

“This is a system which has been in development since 2001 and we were proud as the world’s leading forest certification scheme to have endorsed the CFCC earlier this year,” she said.

The PEFC China program was built on an existing presence in Japan, and extended PEFC's reach into Asian markets. "Governments and companies around the world recognise PEFC certification as a means of guaranteeing that products come from legal and sustainable sources," said Mr Gunneberg at the time.

PEFC China's director, Benson Yu, said "By increasing the number of PEFC Chain of Custody certifications in China, Chinese producers will gain an effective and third-party means to provide buyers with an assurance that their products come from sustainably managed forests." Due to the fact that China is the world's third largest importer of wood and one of the biggest exporters of wood-based products, it was hoped the new China Office would help benefit PEFC certified companies, both within Asia and globally.

Maharaj K Muthoo, president of the Roman Forum, recently stated that forest certification is a soft policy instrument that seeks to use assessments of forest management, the verification of legality, chains of custody, eco-labelling and trademarks to promote the sustainable management, conservation and development of forests in a holistic manner without compromising the rights, resources or requirements of present and future generations.

It aims to encourage ethical trade and commerce and improve market access through the economically viable, environmentally appropriate and socially beneficial management of trees, forests and related renewable resources. Forest certification, therefore, can be a pragmatic instrument for harnessing market forces, public opinion and civil society in support of sustainable forest management (SFM).

These systems, supported by forest certification, conform with the green economy paradigm because they appropriately balance the social, economic and environmental dimensions of development. Forest certification (and associated chain-of-custody certification) is developing into a prerequisite for public procurement and market access, and has become associated with ethical trade and social responsibility.

He concluded “Forest certification and related eco-labelling are innovative policy instruments for assuring the sustainability and multifunctional role of forest assets for human well-being. Forest certification needs to be reinvigorated, however, so that it continues to contribute concomitantly and increasingly to the vision of a green economy. We must not miss the opportunity presented by certification as an agent of sustainability, equity and justice in forests and related industries. Innovative people–public–private partnerships for eco-affluence and a green economy must be built, globally and locally.”

Use It Or Lose It

In many countries where the certified percentage of the existing forest is small, as in China, there will surely be people internationally who will remain sceptical as to the benefits and overall impact or the CFCC. But the adoption of a national certification scheme and SFM regimes by any nation for its natural forest resource must be regarded as a step in the right direction.

In Malaysia, for example, where both certification and SFM have been established for many years, the trees are bearing fruit—literally.  In Indonesia, despite its poor past record of forest husbandry, there is no reason to condemn the country to a boycott of its wood products from its remaining natural forest products if they are sustainably managed.

For the greatest danger remains conversion—to agriculture, palm oil and even rubber trees.  ‘Use it or lose it’ was never truer than with today’s demands on natural forests for booming biofuel and fibre markets.  Plantations can never be a better option than sustainably managed natural forests.  As monocultures, generally lacking in biodiversity and often treated with chemicals, plantations are only second best.

The Paris event therefore should have given some comfort and optimism that China is committed to a system of national certification that respects national sovereignty, based on the inclusion of all stakeholders from the bottom up, which will eventually command the respect not only of government but also of civil society in China and internationally.

Thinking globally, there seems to be another almost insurmountable, unspoken challenge remaining for the forest industry and wood products sector.  If one believes that the message of wood’s positive environmental credentials (carbon sequestration, low embodied energy and infinite renewability) is fast being realised and accepted, then there may be too many cooks in the kitchen, causing confusion.

By that it may be suggested that there are now so many governments, NGOs, institutions, consultants and lobby groups, each with differing agenda, and on so many levels, that markets are becoming confused.  Worse than that is the risk that the complexities of legislation, regulations, administration and protocols surrounding wood as a material might just cause users and specifiers to switch to other less environmentally acceptable materials as an easier option.

Concrete, steel, aluminium, glass and plastic industries have all invested so much in ‘greenwash marketing’ that consumers could be forgiven for continuing to believe that trees should not be cut and for manufacturers to avoid the material altogether, to the detriment of sustainable resources on the planet.  While that was not a specific issue on the agenda in Paris, it gave food for afterthought.

Rate this item
(0 votes)
Tweet
More in this category: « The Rise Of The Dragon Loading Efficiency For Sustainable Transport »
back to top