This study aims at estimating the carbon emission from biomass carbon stock change in tropical forests of Sarawak, Malaysia, within the years 2005–2014 as a consequence of wood harvesting. From the results obtained, it was found that overall carbon emission was a net gain for Sarawak. By Peng Eng Kiat and MA Malek, Universiti Tenaga Nasional, and SM Shamsuddin, Universiti Teknologi Malaysia

The occurrence of carbon in the earth’s atmosphere as a type of gas, which is CO2 or carbon dioxide, constitutes a small percentage of the atmosphere about 0.04 percent. Nevertheless, it is useful in supporting life on earth. For example, plants absorb carbon dioxide from air during photosynthesis and release the oxygen back into the air.

At the point when these plants die or being burnt, the carbon kept in them are discharged back into the air. This characteristic is preserved by dynamic balance between biological and inorganic processes since the beginning, known as carbon cycle. This cycle is important as growing carbon stock in forests is aiding in reducing amount of carbon dioxide in the air.

Recently, the forestry sector is being studied due to the fact that it is an alternative measure to restrict concentration of greenhouse gases (GHG) in the atmosphere. Numerous studies have demonstrated that human disturbance in land usage has changed forest spread over time, especially in the tropic regions.

In Malaysia, land development resulting from rapid economic blooming has caused forested areas being intruded. Thus, more carbon dioxide is being released to the atmosphere when the forested land areas are cleared.

Both natural forest and plantation forest are considered key categories for the Land Use Land Use Change and Forestry (LULUCF) sector in Malaysia’s second National Communications (NC2).

The Malaysian state of Sarawak is located in East Malaysia. Its tropical forest is classified as humid tropical with mean yearly precipitation of 2,800 mm and dipterocarps forest species are the most dominant.

According to the facts and figures obtained from, there are four types of forest in Sarawak namely hill mixed dipterocarp forest, kerangas and montane forests, peat swamp forest and mangrove forest. Each type of forest constituted 77.2 percent, 16.0 percent, 6.1 percent and 0.7 percent out of the total forest area, respectively.

This biggest state which possesses 37.5 percent of the net land area in Malaysia is presently experiencing rapid deforestation because of agricultural extension. Hence irreversible environmental problems such as river sedimentation and landslides occurred. Both impacts are generally related to degradation of forest areas.

This paper aims to provide net change in biomass carbon from plantation forest in Sarawak, due to the reason that carbon dioxide constituted 75.1 percent as compared to methane (23.5 percent) and nitrous oxide (1.3 percent) in Malaysia for the year 2000, as reported in NC2.

At the national level, the Intergovernmental Panel on Climate Change (IPCC) has delivered a set of principle for evaluating greenhouse gas inventories at various tiers. According to Eggleston et al., there are three general methodologies for evaluating fluxes/removals of GHGs known as ‘Tiers’ ranging from 1 to 3.

For Malaysia, early estimation of biomass carbon stocks inventory does not exist. This paper aims to establish carbon stock biomass change inventory from Sarawak tropical plantation forest as a consequence of land use changes resulting from wood harvesting.

In the present study we estimate carbon discharges from change in carbon stocks in living biomass pool of Sarawak’s plantation forest from 2005 to 2014 using the Gain-Loss Method explained below.

In this paper, existing data source such as forest areas together with the timber extraction data were obtained from Sarawak Forest Department, under the category of forest inventory data.

Founded in the year of 1919, the objectives of the Sarawak Forest Department were to manage and conserve the state’s forest resources ranging from forest management, forest protection, efficient and effective utilisation of the forest resources and the preservation and conservation of the flora and fauna in the state. It also performs evaluation of existing data as well as regulating logs production and export from Sarawak.

The focus of the paper will be on reasonable evaluations of carbon in aboveground and belowground biomass. Evaluation of dead organic matter and soil carbon will not be addressed here due to soil carbon stocks do not change with forest management or the purpose of this study, it was assumed that disturbances such as insects and fire do not occur.

Wild fires have been reported but these fires are limited. Therefore, emission from disturbance of wildfire is not included in the study. Furthermore, Malaysia implemented zero burning policy in 1996 where burning is only allowed in special conditions and a permit must be issued by the Department of Environment, Malaysia.

In Sarawak, the major purpose of plantation forest exploitation is for the extraction of timber. Since the majority of forest disturbance are for timber extraction, both forest regrowth and forest carbon loss are accounted in this study. The statistics on volume of legal harvested timber has been obtained from Forest Department Sarawak.

Verified data of forest areas and volume of timber extraction were employed as input to calculate gain and loss of biomass carbon stock. This study aims to develop an inventory on CO2 emissions from wood removal in Sarawak plantation forest.

Last but not least, net change in carbon stocks in biomass is illustrated in Figure 3. All the results were reported for 2005–2014 by using 2006 IPCC Guidelines and are discussed in detail in the following section.

Net C flux in forest remain forest is evaluated from the difference between gain of C resulting from increment resulting from forest growth and losses due to timber extraction. From Figure 1, we can observe that the annual increase for biomass carbon stock decrease slightly then abrupt increase is observed from 2010 to 2011 before slight decrease from 2012 to 2014.

Abrupt increase of biomass C stock from 35.19 Mt C in 2010 to 44.40 Mt C in 2011 is due to increase in forest area. Larger area of forest will lead to higher value of biomass. This is satisfying because forests not only aid in water and nutrient cycling, storing carbon stocks in tropical forest serves as sequestering large amounts of carbon dioxide (CO2) from the atmosphere.

As for the decreasing gain of biomass C stock from 2012 at 44.01 Mt C till 2014 at 41.44 Mt C, the values bring significance that stern actions are to be taken by the Sarawak authorities to prevent the gain from reducing.

We estimate that the decrease is caused by forest degradation activities, increasing growth of population and changes in economic policy. Note that we use the word ‘estimate’ since there exists uncertainty since the process of forest degradation can be slow or rapid, distributed or concentrated.

Wood removal is defined as complete volume which is removed from forests. For the purpose of this study, we assume volume of logs production represents the entire volume categorised as wood removals.

For annual carbon loss due to wood removal as shown in Figure 2, losses increased slightly from 2005 to 2007 before experiencing huge reduction all the way from 2008 to 2014. This might be due to the fact that there is a decrease in annual wood removal resulting from reduced logging in the forest of Sarawak.

On the other hand, for annual change of carbon stock in biomass, the net gain ranges from 28.76 Mt C/year to 39.03 Mt C/year. From Figure 3, we can observe that the values for changes in biomass carbon stock are positive thus we can infer that throughout the years from 2005 to 2014, there exists biomass gain in carbon stock of Sarawak’s inland primary forest.

Decrease in net gain of biomass carbon stocks might cause by loss in the forest area, or may be due to the fact of tree replaced by crops thus the crops do not contribute to gain in biomass carbon stocks or uncertainty do exists in sources of data itself. Meanwhile it is also possible that the C is disturbed by human disturbance. Therefore, we suggest to perform data improvements in the future study for better accuracy of results.

The present study was aimed at the evaluation of annual change in inland primary forest carbon stock in biomass using the latest methodology. To the best of our knowledge, this journal is among the first approach to utilise 2006 IPCC Guidelines and we intend to improve completeness in the reporting of net carbon emissions and removals from inland primary forest of Sarawak.

Despite of uncertainties on the emissions and removals, those inventory supplied a clear current level of emissions to the local people. The calculated Tier 1 net gain in biomass carbon stock for Sarawak’s forests in the present study varies annually. It was the highest in 2011 at rate of 39.03 Mt C/year and the lowest in 2007 at rate of 28.76 Mt C/year, just a year before global economic crisis.

In our case, the change of biomass carbon stock is positive indicating growth in the forests. Therefore this upward change of biomass stand for growing forests (growth exceeds degradation). This is relatively important due to the importance of growing carbon stocks in tropical forests in which forests absorb carbon dioxide (CO2) from atmosphere and store the carbon in wood, leaves, litter, roots and soil. Thus, ‘carbon sink’ is the term used to describe the phenomena.

For carbon loss resulting from wood removal, the losses are reducing in a decreasing trend all the way from 2007 at 6.45 Mt C or equivalent to 6.45 Tg C per year to 2014 at 4.95 Mt C, equal to 4.95 Tg C per year. This is due to the fact that there are lesser human disturbances for conversions of forest land covers despite overall forest area is increasing.

Gain in biomass carbon stock from Sarawak forests fluctuates throughout the period of 2005 till 2014, ranging from 35.21 Mt C to 44.40 Mt C with average value of 38.32 Tg C per year, resulting from reforestation. Forests are gaining attention and importance as role of wood supply and climate change mitigation.

In conclusion, forest area can be used as an indicator of both carbon stock growing and removal parameters. However, carbon exchange between terrestrial ecosystems and atmosphere is considered one of the uncertain components of the worldwide carbon budget.

Forest biomass carbon stock evaluation is important since it allow its users to identify the density of carbon in which a forest can store as well as carbon quantity’s loss from deforestation.

This study employed Gain-Loss Method in estimating biomass from the net balance of additions to and removals from a carbon pool of Sarawak tropical forest including balance between growth and loss from harvesting. However, it is quite uncertain how much carbon is actually emitted in the short and long term from degradation activities.

Therefore, long term political commitment to stopping illegal logging and legal over-logging as well as slowing deforestation while managing and protecting current available forests is a must. Eliminating or decreasing illegal logging will lead to significant impacts on growing stocks together with wood removal.

Rate this item
(0 votes)
Tweet
More in this category: « Wood Moisture — Induced Swelling At The Cellular Scale Wood In The Construction Of Forest Roads »
back to top 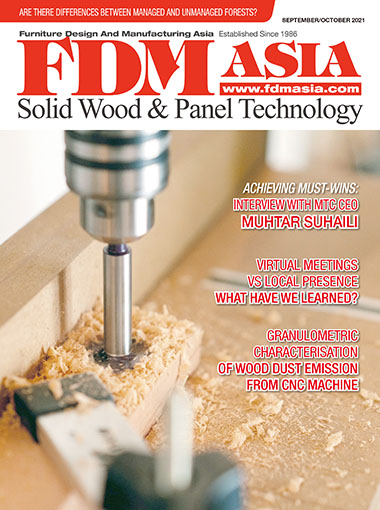