WTO Rules In Favour Of Canada In Softwood Dispute

The Canadian forestry industry secured a victory in the long-standing softwood lumber dispute with the United States, reported by Huddle.

The World Trade Organization has unanimously ruled that U.S. countervailing duties introduced in 2017 against Canadian softwood lumber are inconsistent with the WTO obligations of the United States.

The panel agreed with Canada’s argument the U.S. Department of Commerce made a number of errors in determining the benchmark Canadian timber prices it used to determine whether producers north of the border were paying adequate stumpage fees to the provinces.

The U.S. has 60 days to appeal but the decision likely won’t see the light of day as the appeal body needs a quorum of three to make a decision.

Only one person currently sits on the board and the United States has blocked attempts to appoint new members.

“Canada remains unequivocal: U.S. duties on Canadian softwood lumber are completely unwarranted and unfair. This decision confirms that. Canada does not subsidize its softwood lumber industry, and that is why we have challenged these U.S. duties at the WTO and under the former North American Free Trade Agreement,” said Ng in a statement.

“Canada expects the United States to comply with its WTO obligations. U.S. duties on Canadian softwood lumber must not persist. They have caused unjustified harm to Canadian industry and U.S. consumers alike. U.S. homebuilders rely on Canadian lumber, and the current record-high lumber prices are hurting the economic recovery in both countries. Right now, during these difficult times, businesses and people in both our countries need support, not the burden of additional taxes.

According to TTJ Softwood Specialist, the industry-wide “Wood CO2ts less” campaign is now under way to educate the timber industry, construction sector and wider society.

The campaign, developed by Swedish Wood in cooperation with Wood for Good and the Confederation of Timber Industries (CTI), has been signed up to all by UK timber associations.

The impetus for the campaign came from a presentation at the Institution of Structural Engineers by government adviser Professor Gideon Henderson, who said the government would need to rely on carbon capture to reach net zero. He identified greater use of wood in construction as one simple and largely cost-free way of capturing carbon.

This is something that all wood-related companies need to understand and get behind – it’s a massive topic for now and the future but we can’t expect everyone to just get it. It’s going to take a concerted amount of wood evangelism to make timber’s low carbon message fully heard and understand that we all have a role to play.

According to LBM Journal, National Association of Home Builders analysis of government data has found that new single-family and multifamily residential construction used roughly $94.93 billion in building products in 2019. Although the vast majority of the $94.93 billion was produced domestically, supporting jobs in the U.S. manufacturing sector, about 6.4% ($6.12 billion) was imported from other countries. It may seem a relatively small number, but the 6.4% of the products that are imported can be important in plugging gaps in supply and preventing spikes in input prices, NAHB reports.

Cement and concrete products used in residential construction topped the list with $11.71 billion used in 2019. Architectural and structural metals were in a close second place at $11.17 billion. Asphalt and roofing products made of petroleum and coal registered at $7.73 billion and plastics products used in construction (piping and plumbing fixtures, polystyrene foam insulation, etc.) came in at $6.95 billion.

Wood products—everything from plywood and EWP, sawn lumber, and treated wood—accounted for just more than $10 billion, NAHB reports, adding a reminder that the figures from 2019 do not include this year’s major increase in lumber prices, which NAHB said now accounts for a $16,000 increase in the price of a new home.

According to EUWID, in the fourth quarter Spain imported a volume of 10,451m³ oak lumber; this represents a 21 percent decrease vis à vis the comparative quarter of 2018. The decline in imports recorded in the second (-25 percent) and third quarters (-7 percent) therefore continued. In the first quarter imports had increased by 11 percent. Over the entire period of 2019 imports thus declined by 12 percent to a total volume of 41,606m³. The import value decreased by almost 10 percent to €40.4m, and thus at a less significant rate.

China's first Furniture Intelligent Manufacturing Innovation Center has been set up in Longhui Town, Nankang and it aims to become a national base for intelligent manufacturing, according to dayoo.com.

The facility applies 5G, blockchain, robotics and augmented reality to production processes for rubberwood furniture. The application of robotic production and intelligent manufacturing furniture has lowered production costs for some items by as much as 60 percent.

The pandemic has changed the practice of buying furniture, and the changes are likely to stick, reported by startribune.com.

Exports of waste wood from the UK fell by 39 percent in 2019, a survey from the Wood Recyclers Association (WRA) shows, as demand from the domestic panel board and biomass sector increased.

B.C. Seeks To use Mass Timber To Drive Economic Growth

According to constructioncanada, British Columbia Premier John Horgan has announced the province will focus on mass timber construction to bolster the forest industry.

According to ttjonline, Indonesia has rowed back on plans to weaken rules for the timber exports, following warnings the proposed move would undermine efforts to combat illegal logging and deforestation.

Russia Logs Export Down In 2020

Furniture Imports May Be Faced With Restrictions 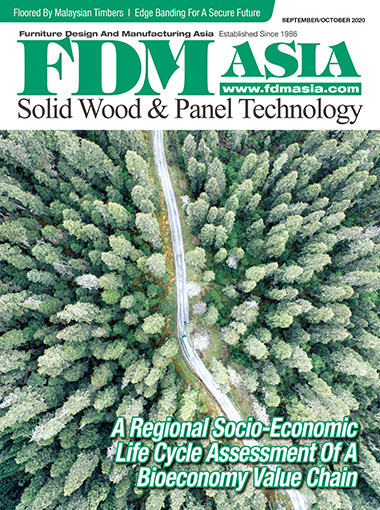